Last October, I took part in a wonderful photoshoot with an amazing team at Clyne farm centre, I didn’t post this blog at the time as we were being featured in Your South Wales Wedding mag, and even had a cover (eek!) so here it is…

I first started chatting to Kirsten from Queen of the Meadow back in June about organising a photoshoot for later in the year, when we were out of lockdown. I gave Kirsten the choice of theme and she decided on Autumn as its such a beautiful season and as Kirsten only uses seasonal flowers and tries her hardest to always use locally grown Welsh flowers in her work.

All of the flowers and foliage used in the shoot were grown locally; the foliage was foraged in Clyne Farm’s 80 acres of woodland, most of the dried flowers were grown in Kirsten’s garden and the fresh flowers were supplied by Blue Hill Flora in Pontardawe. She wanted to use flowers that reflected the season and the colours that occur in nature. 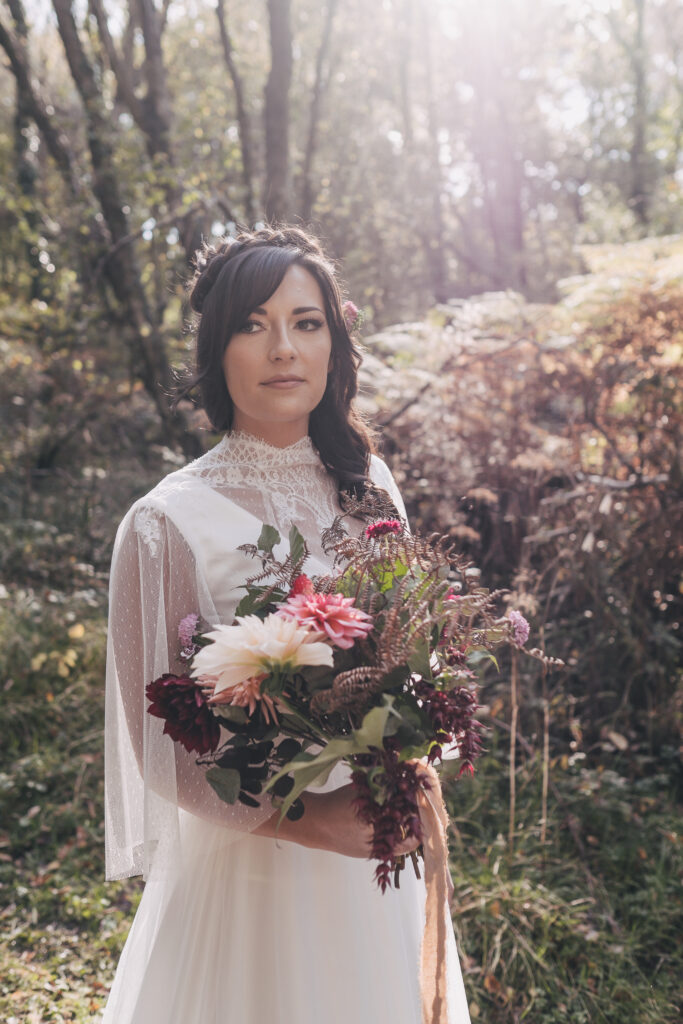 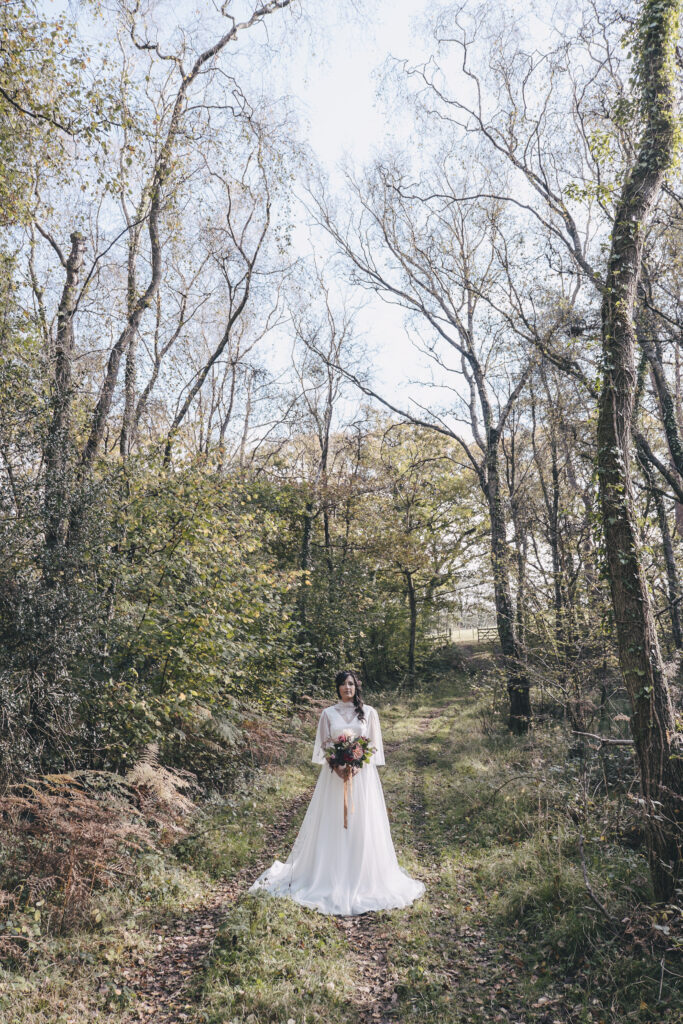 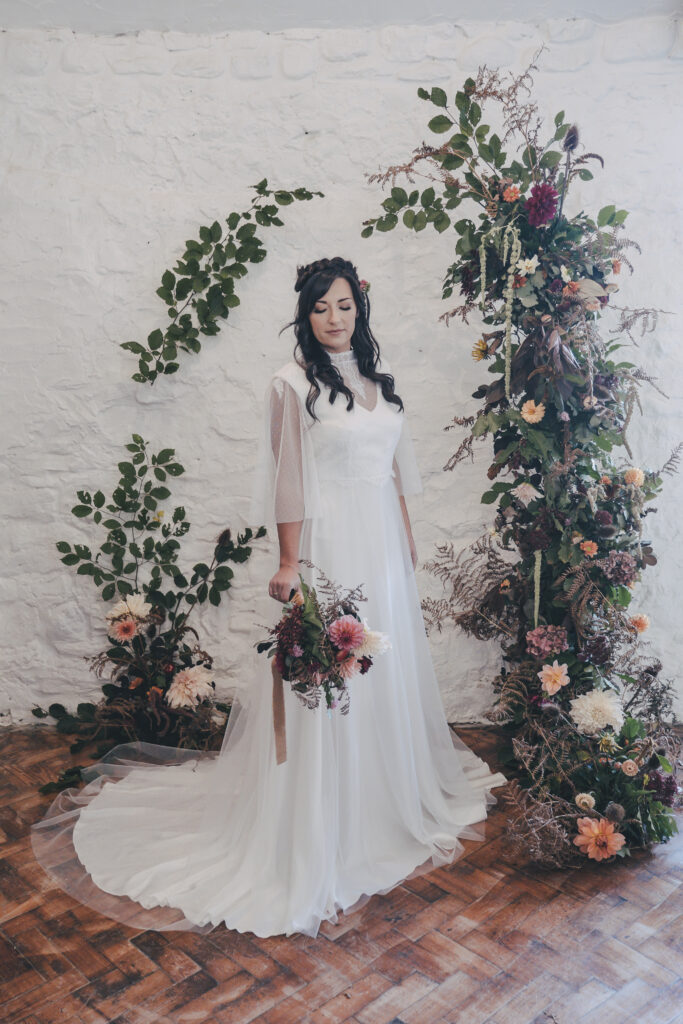 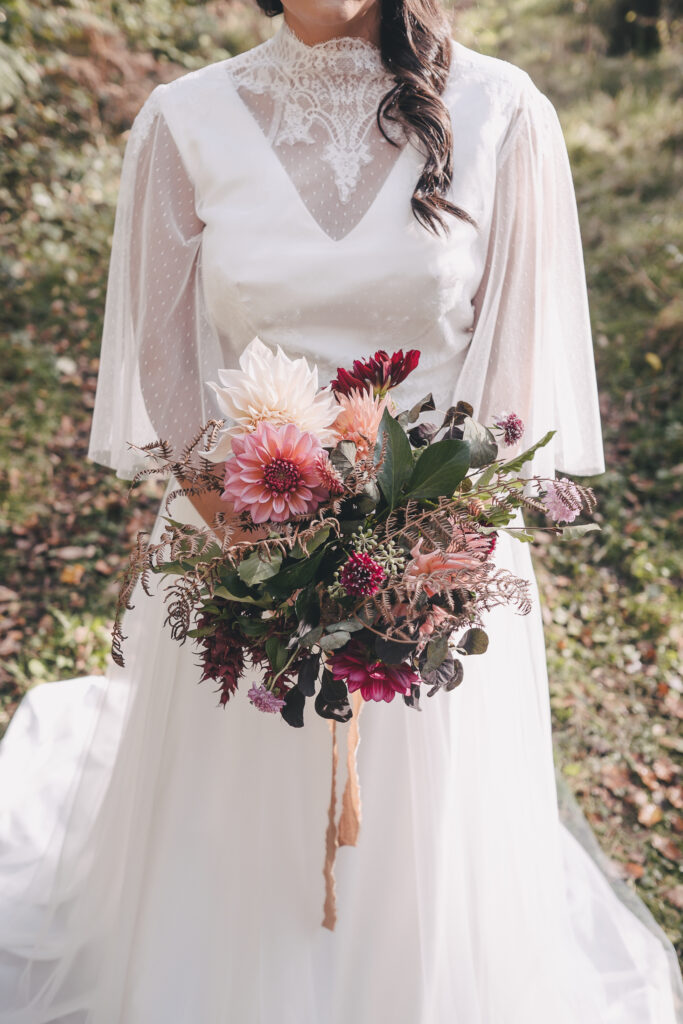 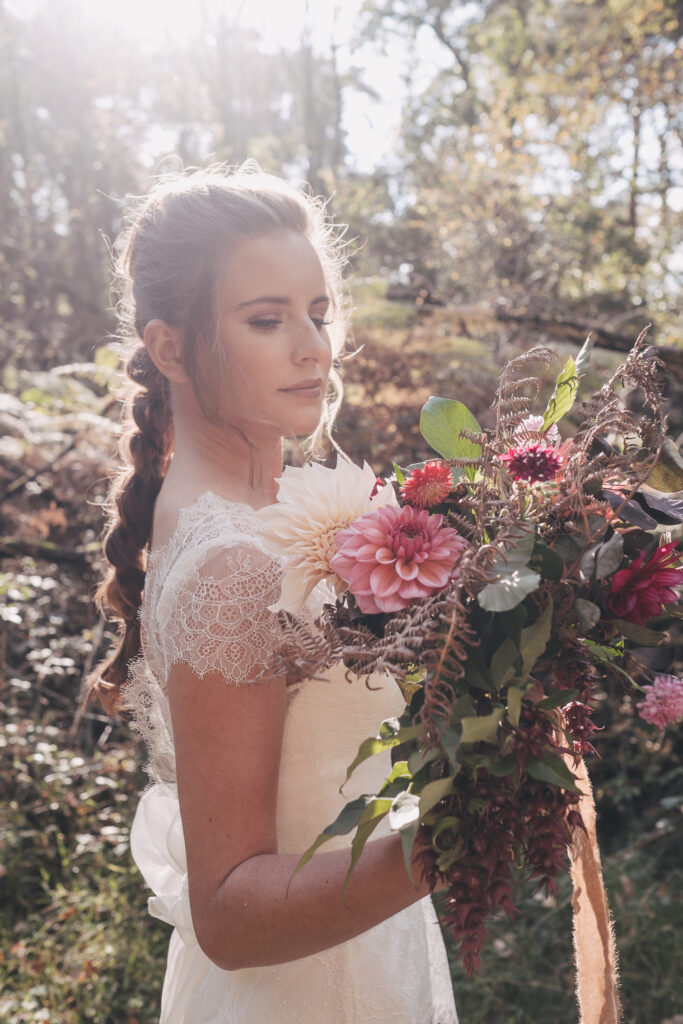 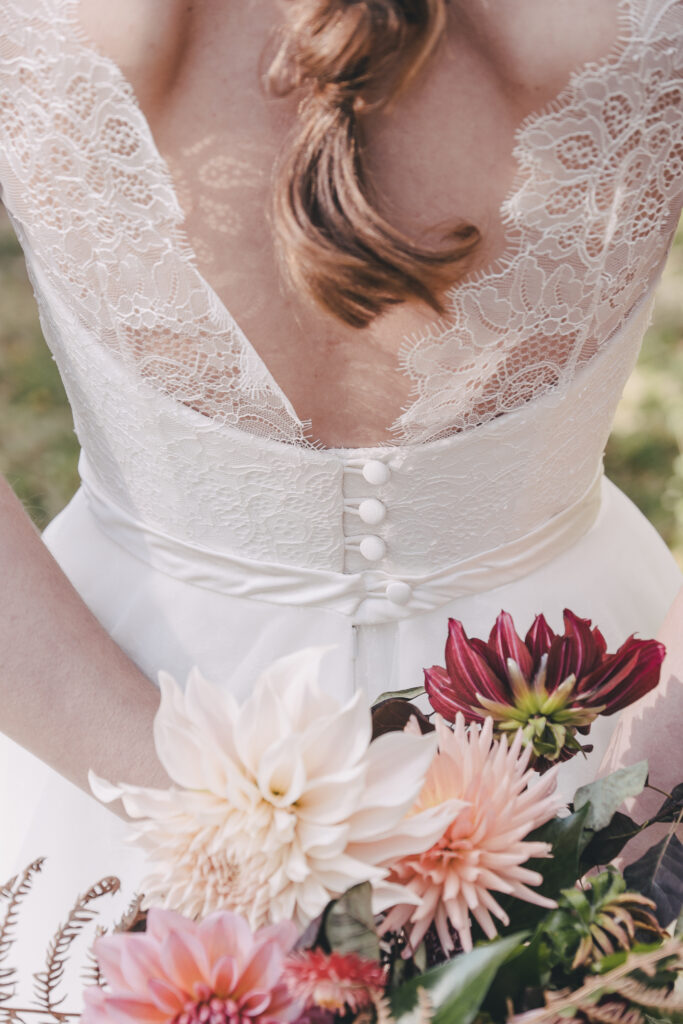 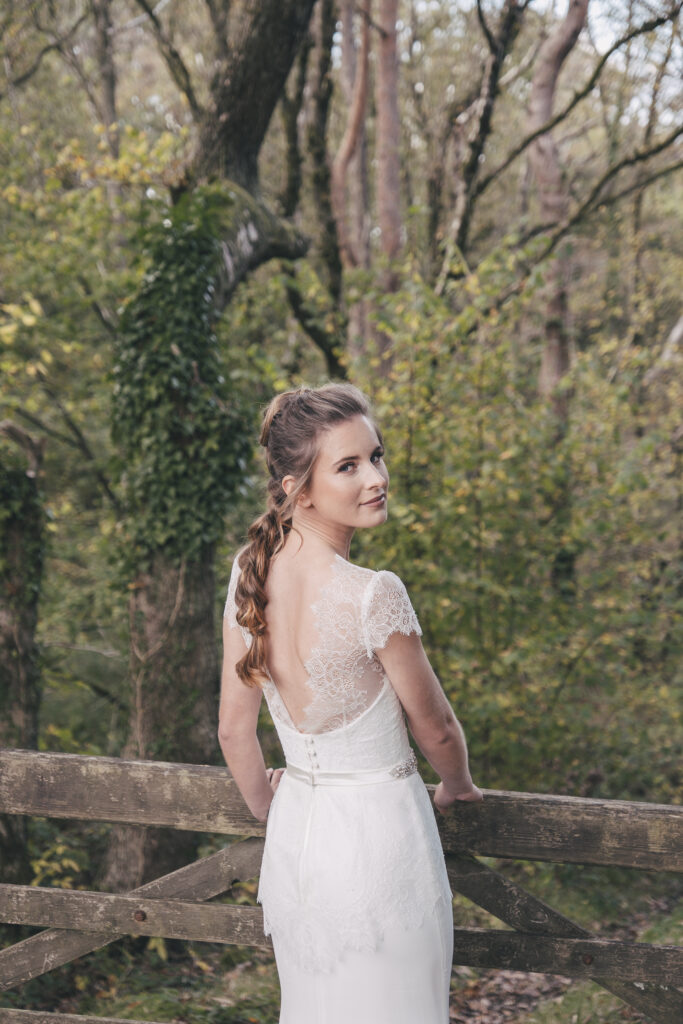 As we had two looks for the shoot, she used a mixture of fresh and dried flowers. As the shoot took place in October, there were plenty of fresh flowers to choose from but she always finds as the weather gets colder she needs to include dried flowers as well in arrangements and bouquets. 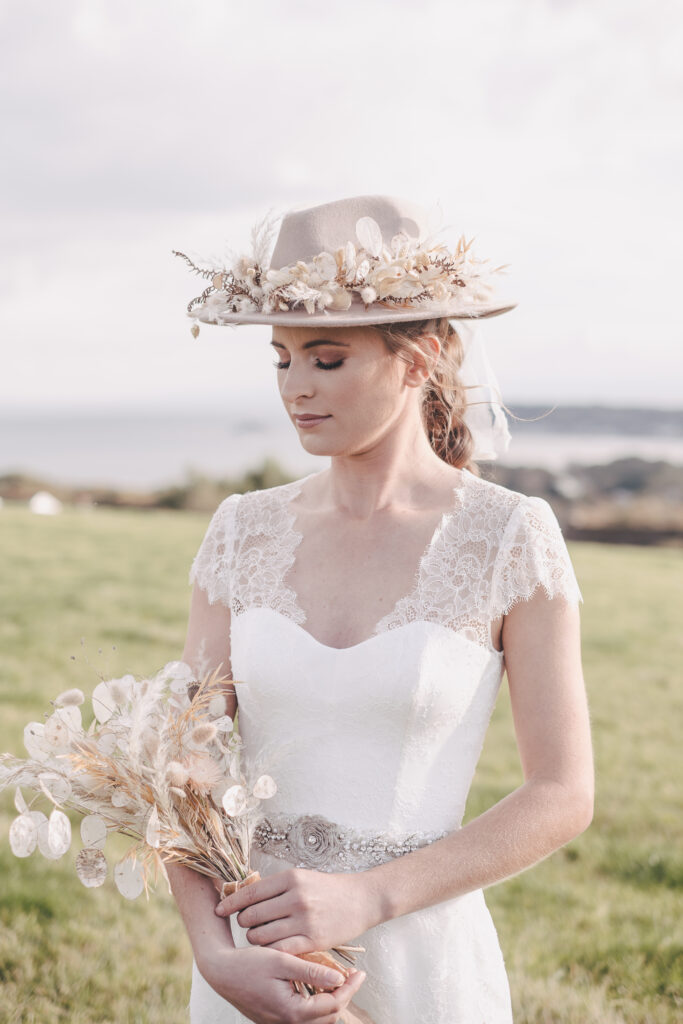 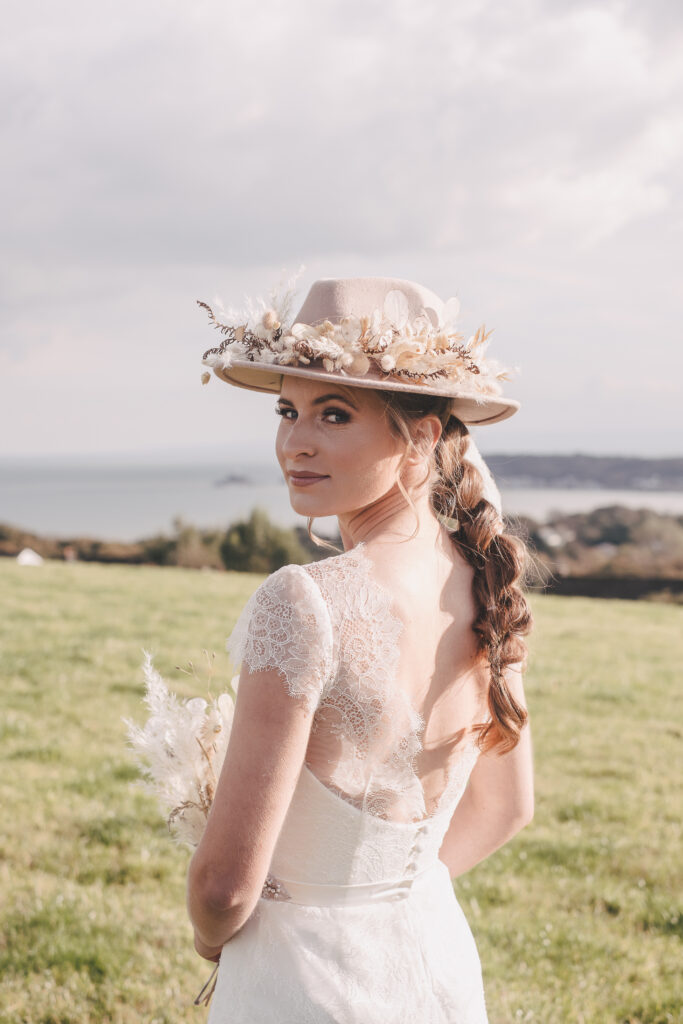 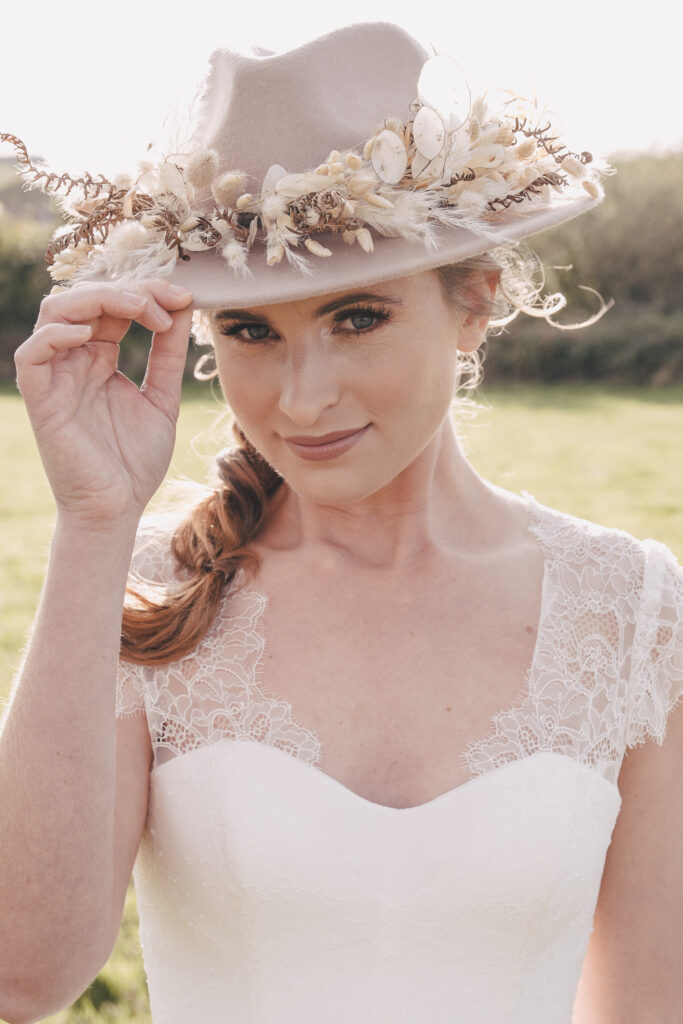 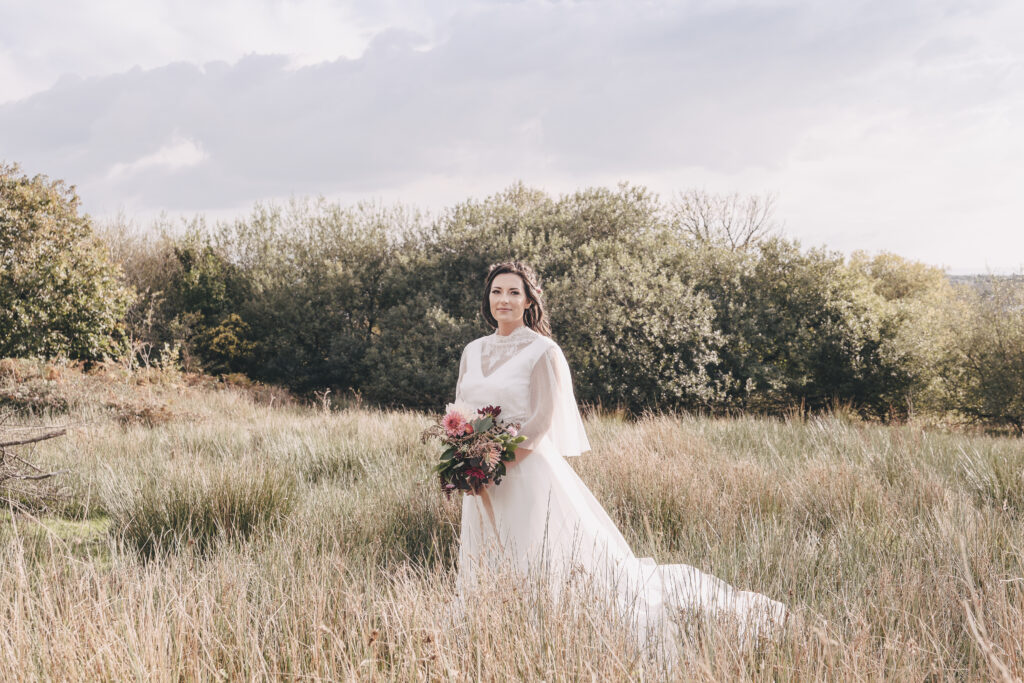 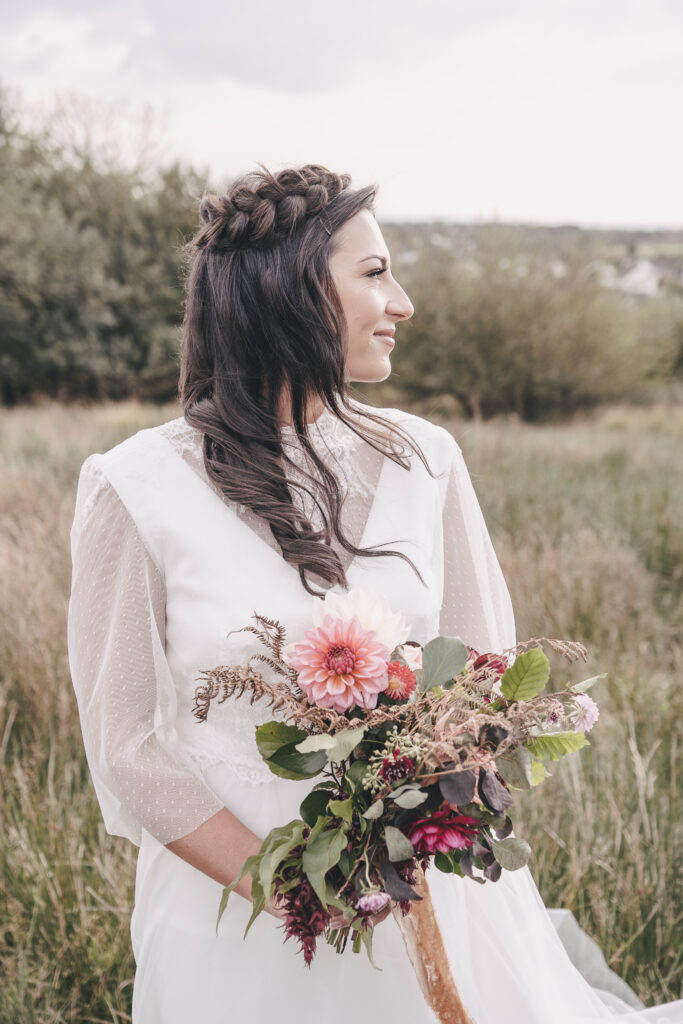 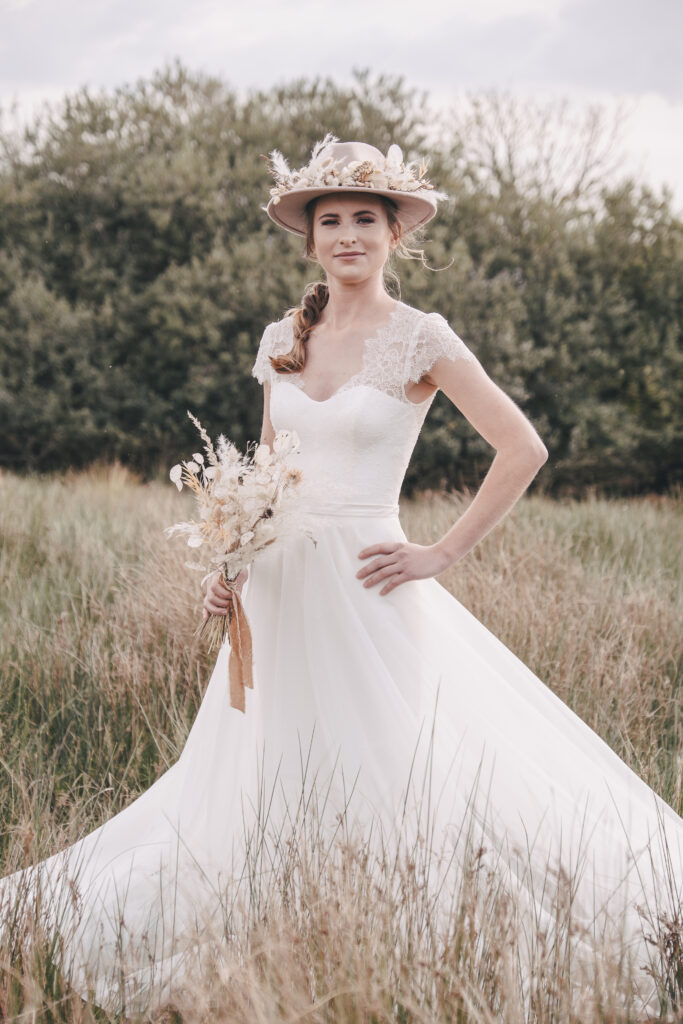 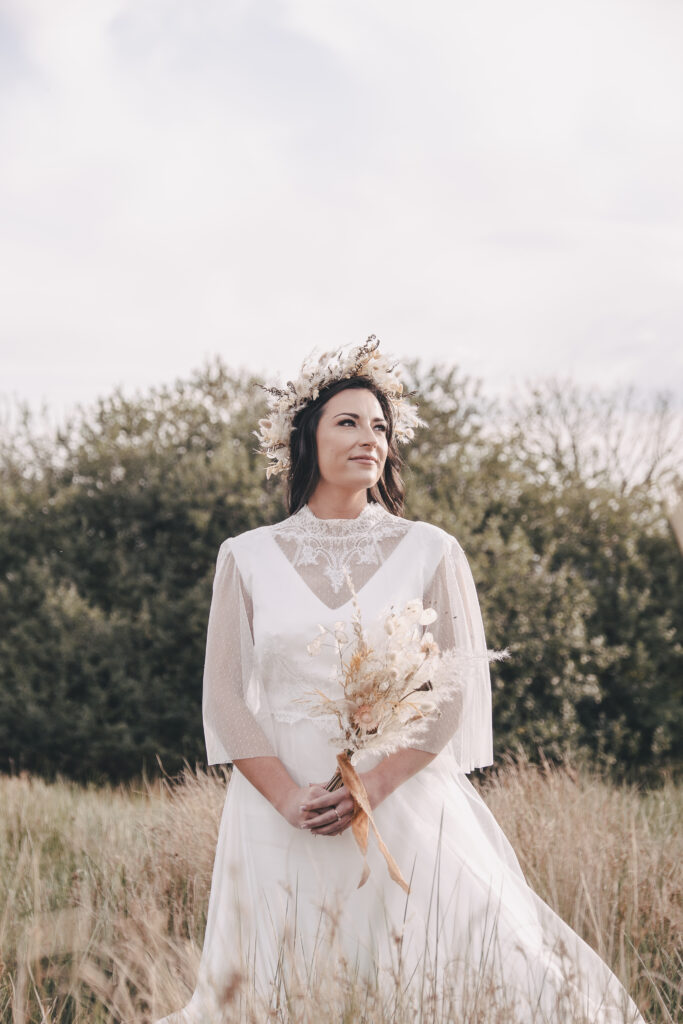 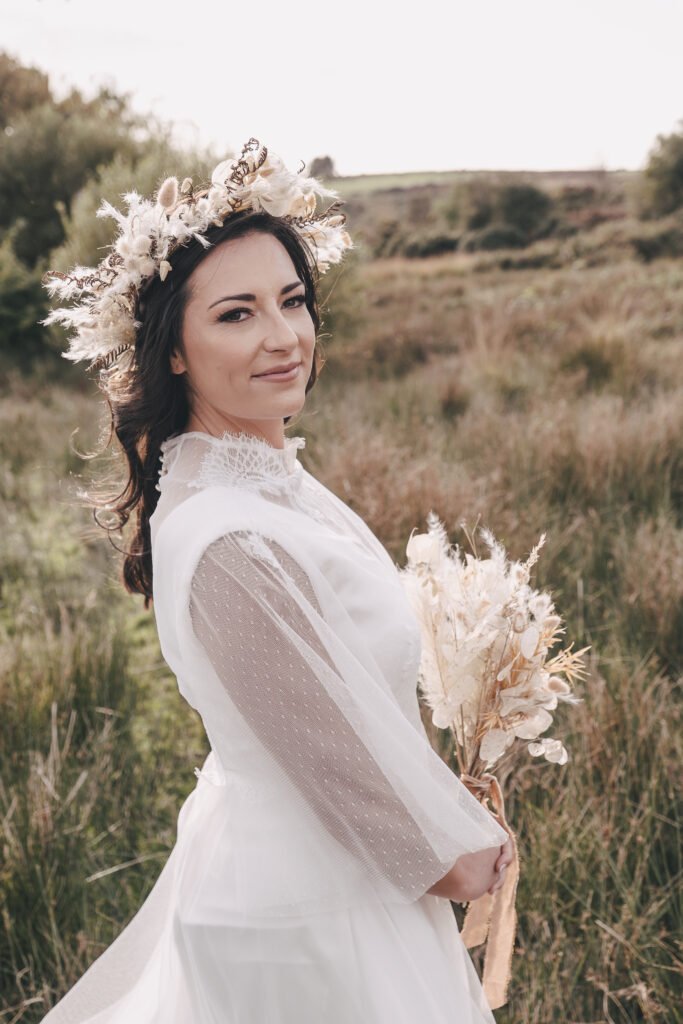 We decided to use the wonderful 400 year old barn for the table and decoration, the amazing Lumi Event Design were tasked with creating the incredible table design which was very much inspired by the surroundings. Lisa and Tor wanted to use rustic, earthy elements utilising the venue’s existing furniture, with natural materials for the place settings; such as linen & raffia to compliment this. To add softness and colour they chose neutral fabrics with touches of gold to bring all the details to life. 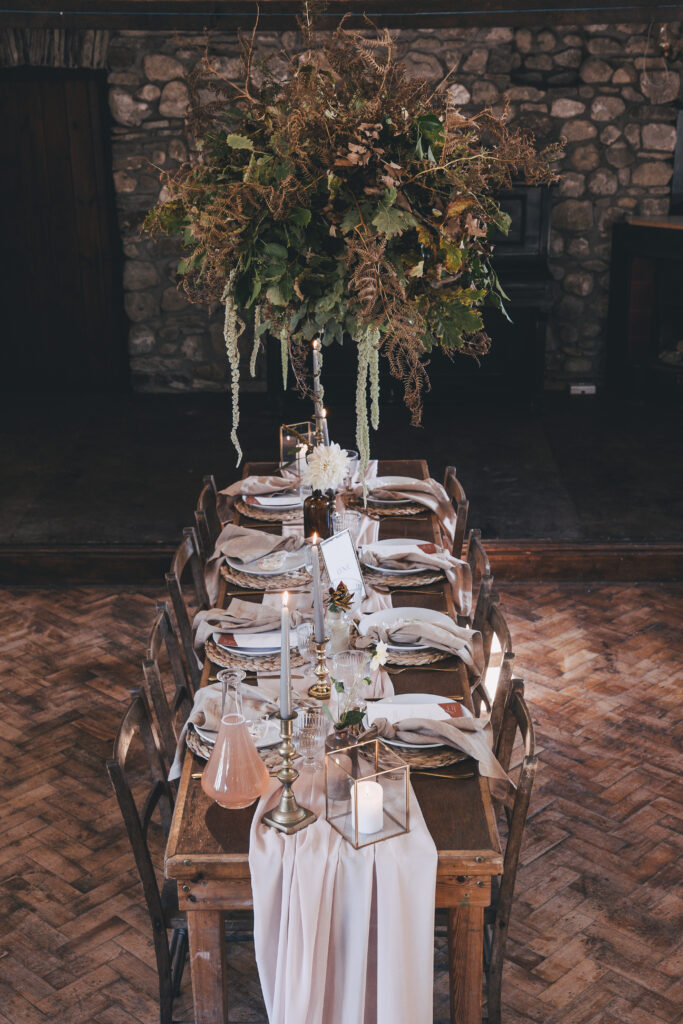 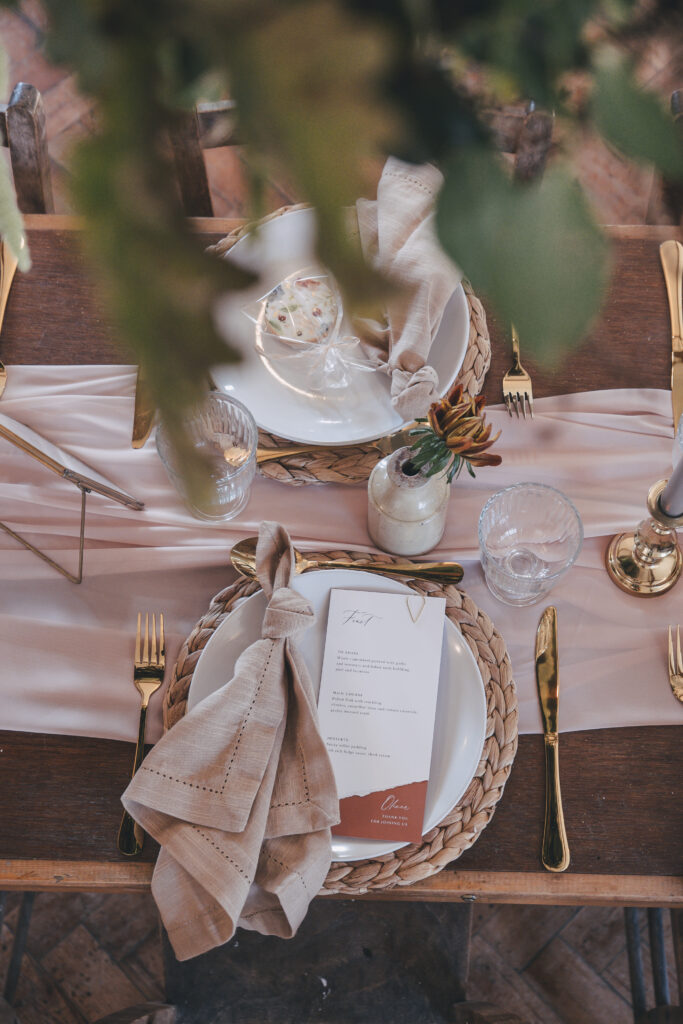 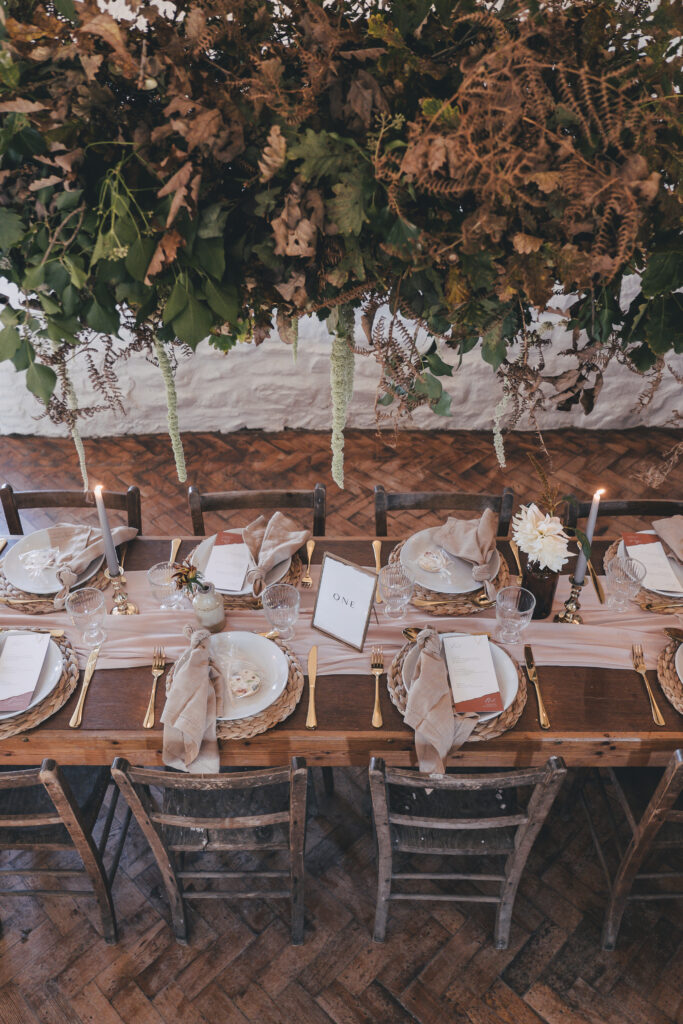 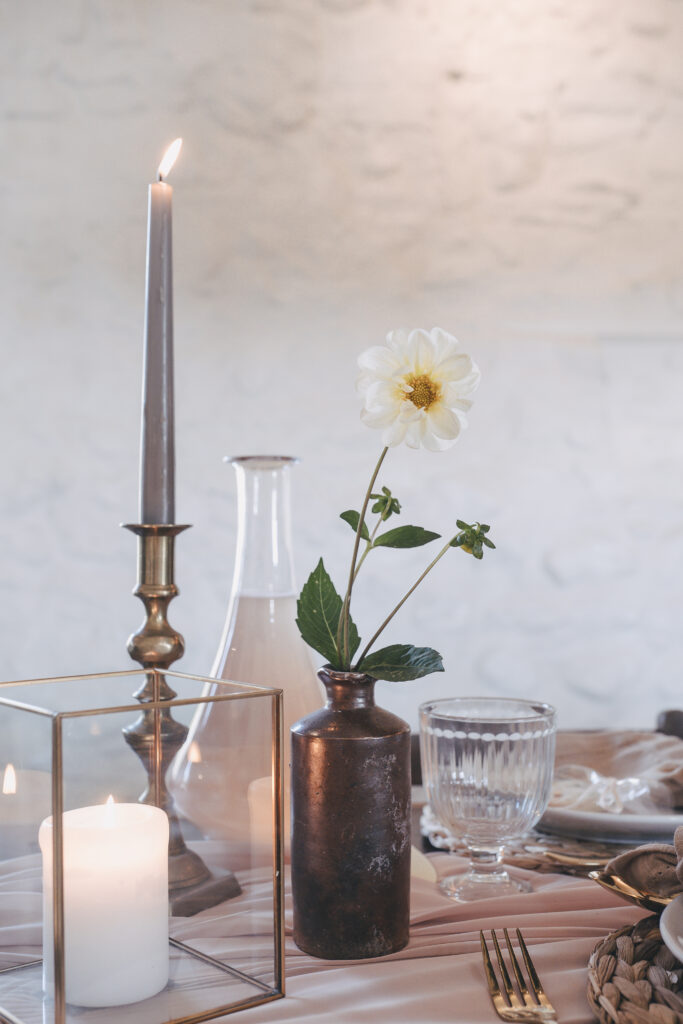 Rowanne of Piece of Cake Wales wanted to design a cake that had understated elegance, soft lines and subtle texture, whilst fitting with a beautifully natural environment and warm tones. 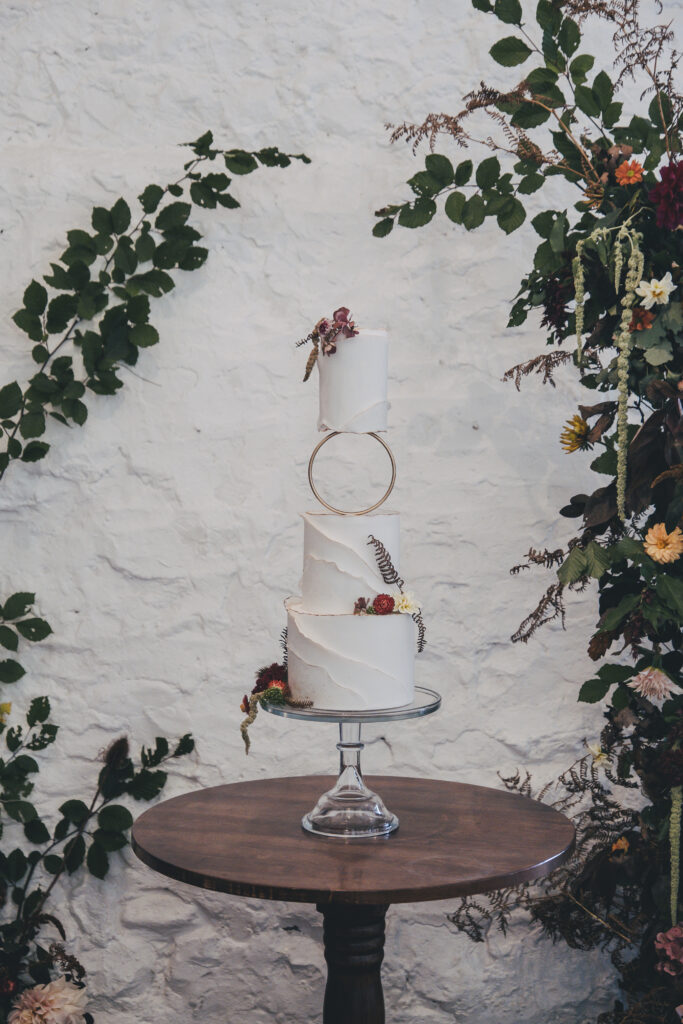 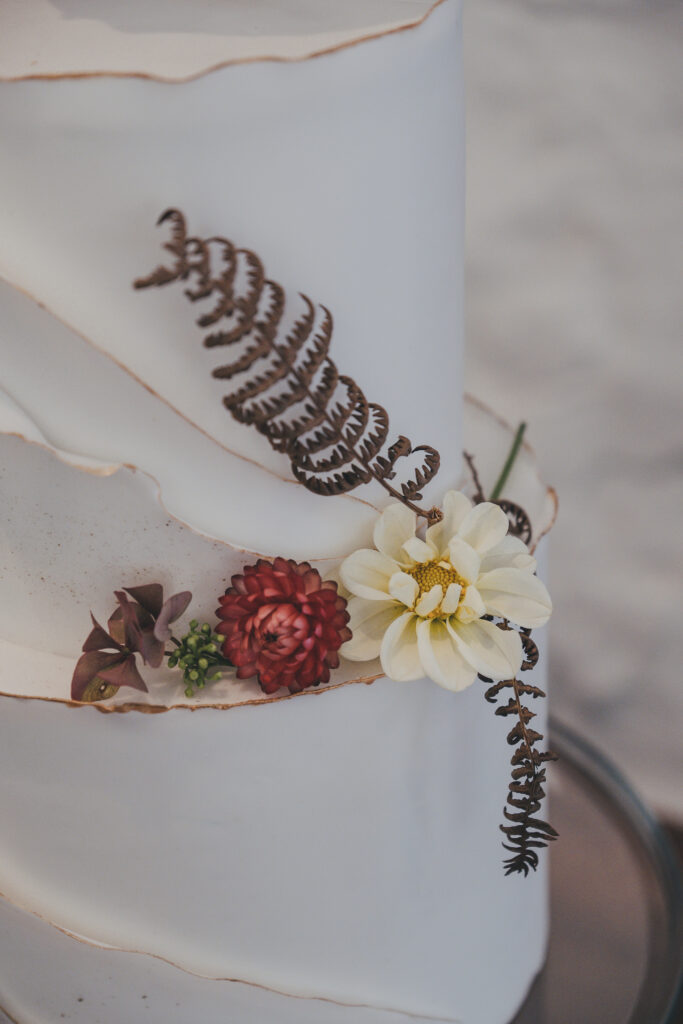 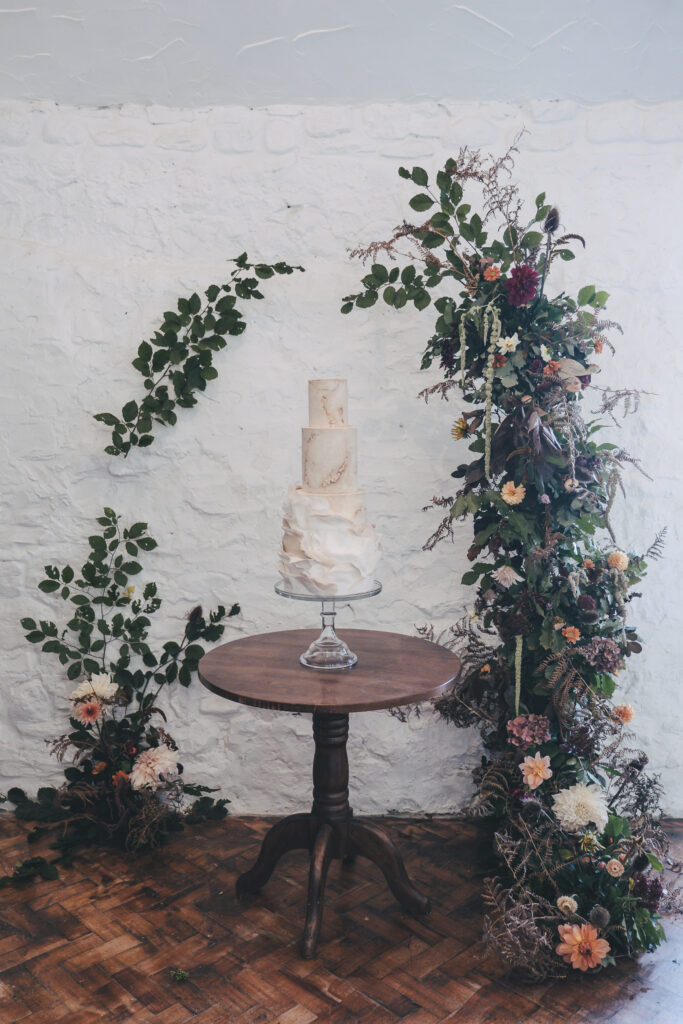 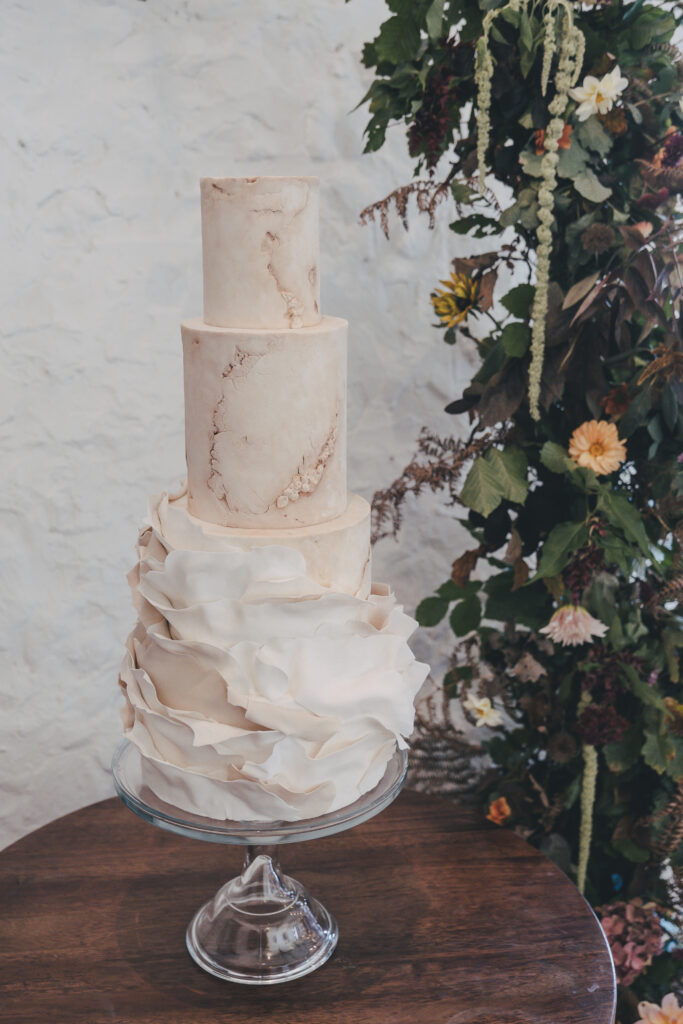 On the first design a tier separator stand was used to create illusion and add height – a great addition to smaller wedding cakes with fewer tiers for intimate weddings. Soft ruffles with delicate guilting encase the tiers adding gentle texture to a sleek design. The finishing touches were flowers and foliage complementing the floral backdrop, adding a colour pop and completing the look.

The second design featured a hand painted stone effect with sweeping ruffles. The upper tiers of the cake are bold and sleek with a realistic texture painted using warm tones. The ruffles towards the bottom of the cake add contrast and interest making the design bold yet graceful.

The Dwynwen brand and product has always been timelessly simple and romantic at its heart, with a contemporary finish (and just a touch of luxe) to appeal to modern couples. So it’s fair to say that the rustic aesthetic to the wonderful venue, Clyne Farm, was new territory for Dwynwen. Ryan’s aim was to stay true to my simplicity and tone of voice but to carefully blend it with an earthy, relaxed finish that would complement the carefully curated decor and styling. 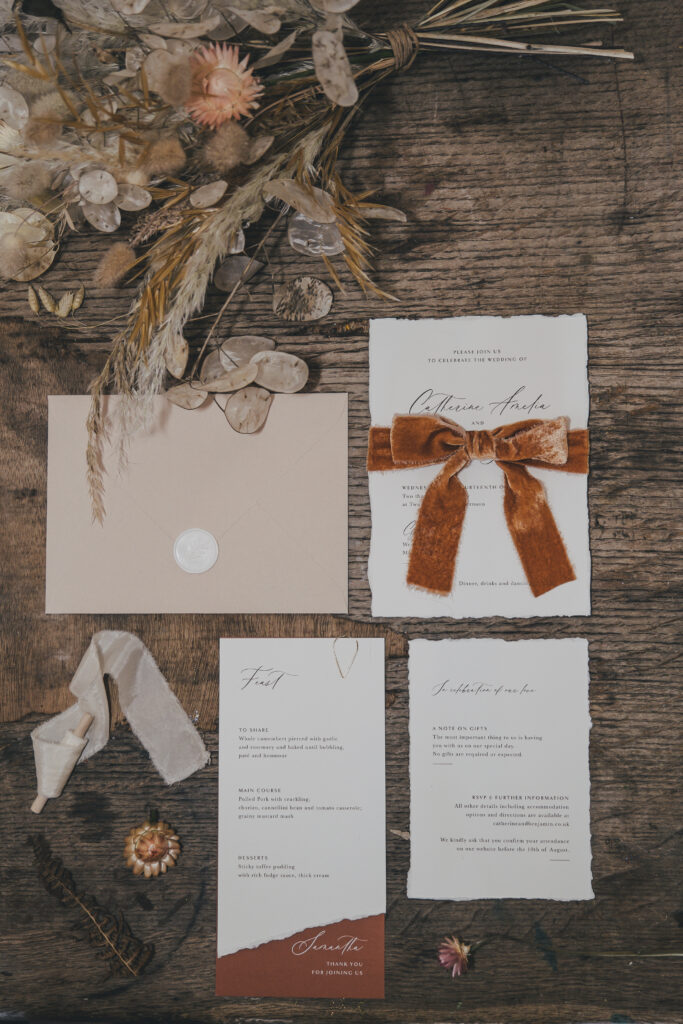 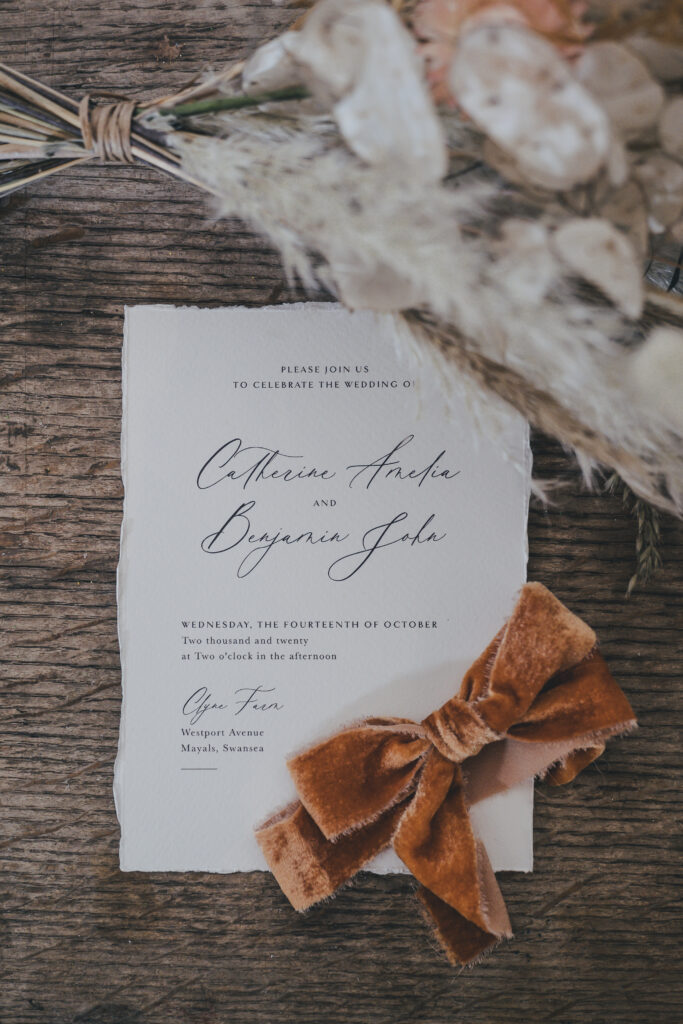 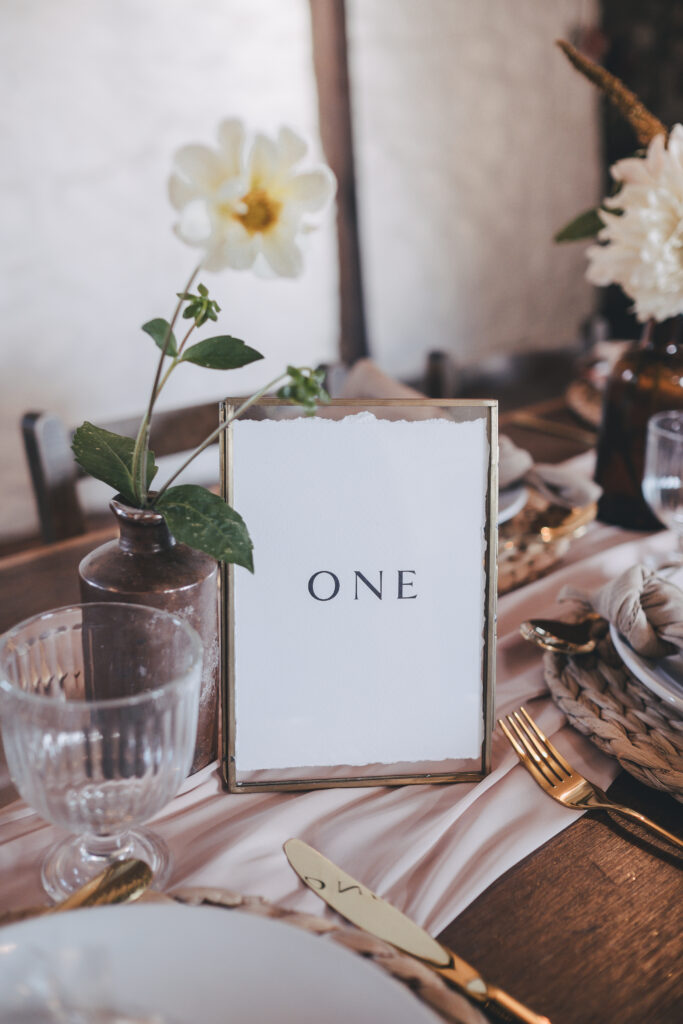 The simplicity of the typography in this suite is distinctly Dwynwen and very much the signature. Ryan added hand torn detailing for texture and to relax the formality of the stationery, bringing it down to earth perfectly for an intimate micro-celebration. Opulent and tactile velvet ribbon tied around the invitation suite and a touch of metallic gold on the dinner menus helped retain a small hint of luxury and glamour – even in the most rustic and laidback of settings.

For our very last shots at the end of the day we brought the lovey Ferne out of the stables, our model; Morgan is the stables manager at Clyne Farm centre and has a lovely bond with her, which you can see in the photos.

Hope you’ve liked learning more about our photoshoot, all the suppliers that took part can be found in the list below.

You like my style, want someone with a lot of creativity, a down to Earth and friendly wedding photographer to photograph your big day. Someone that will photograph a nice mix of photos, the documentary, groups and portraits.

Recommended Photographer at these venues...

This website uses cookies to improve your experience while you navigate through the website. Out of these cookies, the cookies that are categorized as necessary are stored on your browser as they are essential for the working of basic functionalities of the website. We also use third-party cookies that help us analyze and understand how you use this website. These cookies will be stored in your browser only with your consent. You also have the option to opt-out of these cookies. But opting out of some of these cookies may have an effect on your browsing experience.
Necessary Always Enabled
Necessary cookies are absolutely essential for the website to function properly. This category only includes cookies that ensures basic functionalities and security features of the website. These cookies do not store any personal information.
Non-necessary
Any cookies that may not be particularly necessary for the website to function and is used specifically to collect user personal data via analytics, ads, other embedded contents are termed as non-necessary cookies. It is mandatory to procure user consent prior to running these cookies on your website.
SAVE & ACCEPT